The game began at 10.30 on a frosty Sunday morning. I had just returned from injury, and was playing in defence for my local non-league football team. Despite the fact that I was 48 years old – the oldest player in the team by far – in my own slightly delusional mind I was still a sporting gladiator of the amateur arena. All the friends I had battled alongside over the years had now retired – growing fat and lazy in front of Sky Sports – but I was still here, still playing.

The opposing team were young, with a fast striker. After 15 minutes he received the ball and knocked it past me into space. We both gave chase, shifting at full pelt, our faces grimacing. But after just 20 yards I felt him begin to pull away from me. I was no match for his young legs. Just then I felt a sudden sharp pain in the back of my right thigh, and I slowly hobbled to a stop. I had pulled a hamstring muscle. I couldn’t believe it. I was injured – again. I signalled wearily to the touchline. Minutes later I was substituted.

For 20 years I have run five miles three mornings a week, and for 30 years I have played competitive non-league football. But now I was forced to contemplate my future in the sport. Biological decay, physical decline, is a certainty that most of us dread, partly because it reminds us of our mortality. Nowhere is this more marked than the day a sportsman or woman, amateur or professional, realises they can no longer compete at the level they once did.

I could remember the days when I was good. Oh, those days! In our society, to be talented is to be valued, and so to lose that talent is to feel diminished, both in one’s own eyes and in the eyes of the world. Nostalgia becomes the paracetamol we use to dull the pain of this sense of loss. 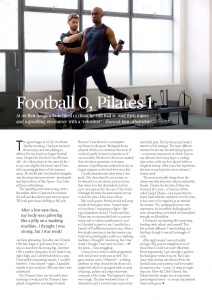 My couch-potato friends would still swap stories of their glory years. I wasn’t ready to join them. I was going to fight – like a good gladiator should. I had heard that Pilates was recommended both to prevent injury and to enhance performance, and so I decided to give it a try. I enrolled at a branch of TenPilates near my home. After a few simple exercises at my first session, my body was quivering like a jelly on a washing-machine. I thought I was strong, but I was weak! I thought I was hard, but here – off the pitch – I was struggling.

I was put on a twice-a-week programme, with extra home work-outs as well. The gym sessions used a “reformer” – a sliding platform on what resembles the frame of a single bed, which is equipped with an array of springs, pulleys and straps that work every part of the body. The beginner’s classes were tough. The first week was a blur of discomfort, and I would return home wide-eyed with pain. But by the second week I started to feel stronger. The most difficult exercise for me was the side-lying leg press – a torturous manoeuvre in which I lay on my side and moved my leg in a cycling- type action, with my foot placed within a weighted stirrup. After just a few repetitions the pain in my hip joint was so intense I almost cried.

The most noticeable thing about the classes was that they were almost exclusively female. Despite the fact that Pilates was invented by a man – a German athlete called Joseph Pilates – and is practised by many male athletes, somehow over the years it has come to be regarded as an exercise for women. Yet, speaking from my own experience, it’s incredibly challenging for men, demanding a new kind of internalised strength and flexibility.

I had spent my sporting life competing, battling, with others, with myself. This felt entirely different: I was building, not battling, though it as still a struggle of sorts.

After eight weeks I was noticeably stronger. My posture straightened and I found that I could run more efficiently. More importantly, I got through a practice football game without injury. But I also learnt that, during my absence from the football team, my position had been taken by someone else – a man 15 years younger than me. How did I feel? Gutted. But Pilates had also taught me an important psychological lesson – to accept my physical limits with grace.