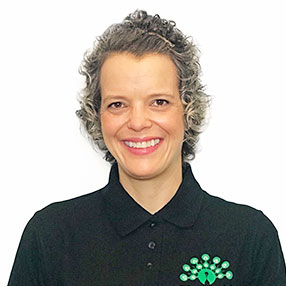 Fabi started to practice Pilates back in Bento Goncalves, in southern Brazil when she was in her teens. Moving to Europe in her 20’s, Fabi left behind her beloved friends, dance and volleyball but brought her love of Pilates with her. She lived and worked in Lisbon, Bologna and Paris before eventually settling in London.

Fabi describes her teaching style as gentle but with purpose, dynamic and challenging. She is hands-on in correcting posture and alignments, focusing on breathing, control and precision of the movements. Fabi’s aim is for people to come out of her class feeling proud of how far they pushed themselves and excited about their next class.

The benefits of applying movement as a form of therapy is something Fabi has first-hand experience of. She firmly believes that exercise helped her cope mentally and physically when she went through cancer treatment herself, and it’s what inspired her to specialise in Cancer and Exercise Rehabilitation.

Away from the Pilates studio Fabi enjoys spending time with her family, expanding her knowledge of healthy eating, brewing kombucha, listening to Jazz and exploring the English countryside.