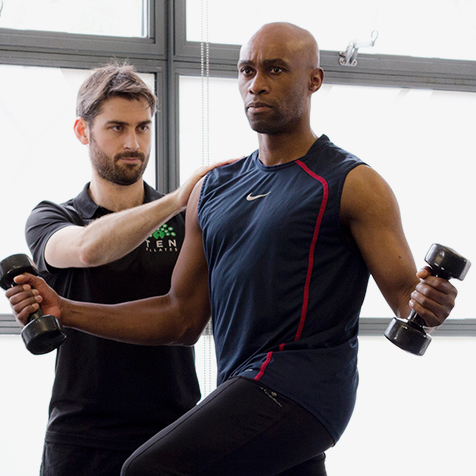 “After a few exercises, my body was quivering like a jelly on a washing machine. I thought I was strong, but I was weak!”

At 10.30 on a frosty Sunday morning Ben Arogundade was playing in defence for his local non-league football team.

Ben was fit – for 20 years he’d run five miles three mornings a week, and for 30 years played competitive non-league football. Despite being 48 years old – the oldest player in the team by far – Ben was still a regular on the team.

Chasing full pelt after a ball, he felt a sudden sharp pain in the back of his right thigh. He hobbled to a halt with a pulled hamstring muscle, the pain in his leg compounded by the dread that his increasing injury rate was threatening his ability to compete at the level he was used to.

Unwilling to hang up his boots just yet, Ben had heard that Pilates was recommended both to prevent injury and to enhance performance. After an initial assessment, Ben began a twice-a-week programme of Dynamic Pilates sessions, with his Trainer prescribing extra home exercises .

In Ben’s words: “ After a few simple exercises at my first session, my body was quivering like a jelly on a washing- machine. I thought I was strong, but I was weak! I thought I was hard, but here – off the pitch – I was struggling.”

Even though Ben was a life-long exerciser, and these were beginners’ classes, he found them tough; “The first week was a blur of discomfort, and I would return home wide-eyed with pain.”

But by the second week he started to feel a difference, and after eight weeks Ben was noticeably stronger. His posture straightened and he found that he could run more efficiently. More importantly, he got through a practice football game without injury.

However, during his absence from the football team, his position had been taken by someone 15 years younger. As a natural competitor, on one level he was gutted. But on another, he had found that the physical improvement he had experienced at Ten had been matched by an important psychological lesson – and through Pilates he had learned to accept his physical limits with grace.