Every well-built structure requires solid foundations, and during my seven years as a fitness writer and Personal Trainer I’ve discovered that the average workout is no different. I’ve also come to the conclusion that if you can’t explain it, it doesn’t exist. Put simply: if a gym, studio, trainer or supposed ‘guru’ isn’t transparent about the method behind their muscle-building, it probably isn’t worth pursuing.

That’s why I was intrigued to attend Ten Health and Fitness’ Masterclass on the ‘Seven Principles Of Movement’ recently, launched as part of their Move Better campaign that will be running throughout autumn. Led by Neil, this small group workshop is about improving the quality of participants’ movement as well as educating them about its purpose.

The basis of all human movement

So firstly: what are the seven ‘principles’? The answer is simple: Hinge, plank, push, pull, squat, lunge and rotation. Singly or in more functional combinations, these 7 movements are the basis of every exercise there is, and also pretty much all human movement.

Whilst these are basic exercises, which we’ve all been performing since childhood, many of us don’t perform these exercises as well as we think, or should. Learning – or in many cases re-learning – the correct techniques will help us move more freely, efficiently and most importantly helps avoid injury.

And that, Neil explains, is exactly what this Reformer-based Masterclass is designed to do.

You might be conscious of it during class, but every Dynamic Reformer Pilates session includes these movement patterns. They can be simplified or advanced, according to fitness level and ability and can also be taken off the reformer and onto the floor, used to provide the outline of any workout plan.

Here’s the technical bit: within each of these these seven principles of movement there are exercises and sequences that simply focus on a single movement pattern, and as such are a great way to (re)learn how to preform them correctly. But as clients improve in body awareness and capability, single-principle exercises can also be combined with one or more of the other principles to create multi-planar exercises, which means they include forwards, back and side to side and rotational movement ideally at the same time! This helps to create true strength and prevent injury. 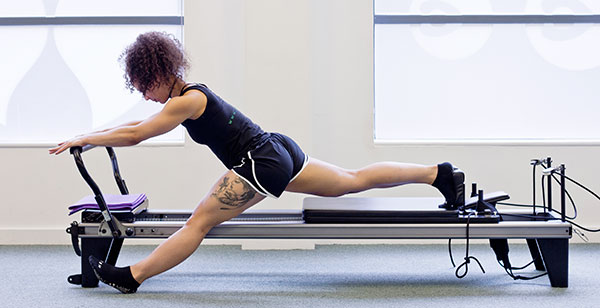 We begin with the hinge, and what instructor Neil refers to as the ‘double trouble’ hip stretch. This doesn’t just do as the name suggests but also educates the body as to how to hinge forward with good form. Hinging well is very important because it’s involved in so many different movements. A deadlift is a hinge for example (and that’s involved in picking virtually anything up off the floor) and training this helps us strengthen the posterior chain – ie the muscles that run down the back of our bodies and support the back in particular. If you can’t hinge (or deadlift) correctly, you can’t really squat or lunge properly either and you’re at risk of lower back injury as well as wasted training time.

Next up is the Wheelbarrow, though as the name doesn’t suggest, it’s more about planking than gardening. The exercise involves kneeling on the carriage and placing hands on the foot-bar – sliding back and forwards in a half plank position. Did you know that a new World Record for holding a plank was set in China in May this year: 8 hours and 1 minute? Well, trust me, that’s nothing in comparison to holding and sliding in plank on the reformer, a move which helps encourage stability across the hips, tummy and glutes and also makes the participant (ie. me) start to negotiate furiously with their instructor.

“It’s hurting,” I groan. “Any chance of moving on now if I promise to work harder on the next one?”

But Neil merely smiles and shakes his head. As it turns out (lucky me!) I have an ex paramedic as an instructor; Neil spent two years in the hills of Los Angeles dealing with, amongst other things, gunshot wounds. What this means is that a) Neil can distract me from muscular torment with some fairly impressive stories but b) such muscular torment is fairly unending since he has a different (relative) concept of pain which results in his being unmerciful about my shaking quads. That said, I feel free to take a few more risks on the reformer, knowing that, were I to topple, my instructor could administer CPR with the utmost efficiency. 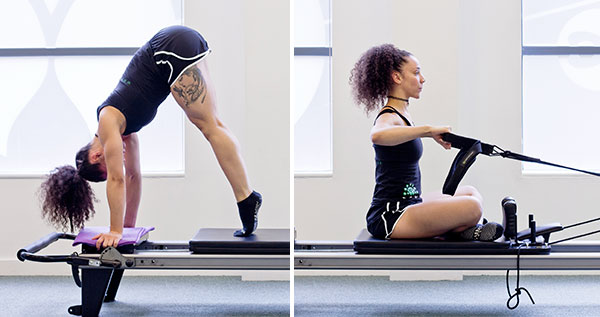 Thankfully, it’s not necessary: I remain statuesque throughout the class. Sort of, that is, once the plank torment ends. Now it’s time for the push and pull, our third and fourth principles of good movement (a few different exercises on the reformer), both of which are important for developing shoulder stability and upper body strength.

The push begins with (you guessed it!) a plank position, from which my elbows slide forward and back under my shoulders, engaging the chest, shoulder and stomach muscles. This then becomes a four-point hover with feet and hands on the reformer but knees and elbows off as if about to start crawling, requiring me to get all the smaller muscles firing so I can stabilise fully here until Neil says… change!

And now it’s time for some pulling action.

One of the major muscles in our backs is the trapezius, Neil explains, but we often forget that it’s made up of upper, middle and lower parts. Lots of desk-based computer work results in postures that over-stretch (and therefore stress) the upper traps while switching off the lower and middle traps – ironically, just like the typical laptop-user’s head-forward rounded-shoulder posture I’d lapsed into while typing this, and am now consciously resetting myself from. So Neil helps me redress this with a shoulder retraction and dumb waiter sequence. With the shoulders pulling back and down, what feels like a comparatively small and simple movement swiftly relaxes the upper traps and as the burning sensation between my shoulder blades soon proves, my mid and lower set are now most definitely switched on and working. 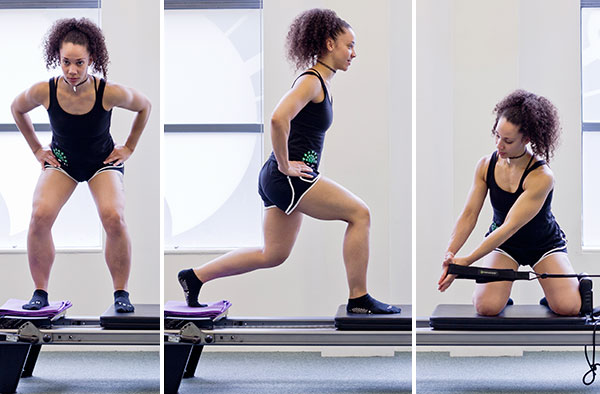 And now, the final three – squat, lunge and rotation. Neil puts these one on top of the other, so we are building skills via a basic squat, followed by a squat and side lunge, followed by a side lunge on the platform (a.k.a. a ‘skater’) alongside a rotation in the upper body. This one works the entire body and requires all my powers of concentration not to wobble.

That marks the end of this all-important lesson. Phew. Neil comes to my rescue with an emergency smile and a well-deserved glass of water.

No doubt about it: the workshop has inspired me and I feel more sure of the point behind each movement and also the ways in which to perform it better.
View Timetable and Book

Her book, ‘Run, Ride, Sink or Swim: A Year In The Exhilarating and Addictive World of Women’s Triathlon,’ was shortlisted for the New Writer category at The British Sports Book Awards 2016.