When can I start running again post-baby?

“When can I return to running?” is a question that women often ask us in-clinic after childbirth. Whether you’ve had a natural birth or caesarean section, returning to running is something that should be taken slowly – despite how good your legs feel – because of the effect it can have on that very important group of muscles called the Pelvic Floor.

Think of childbirth as an acute injury

Childbirth (whether vaginal or c-section), and its effect on the Pelvic Floor can be likened to an acute muscle injury. It’s essential to allow time for healing, along with rehabilitation, then a gentle and managed return to running before any attempts to perform at your pre-pregnancy levels. (In truth, it’s very similar to the process you’d follow if you’d injured your hamstring and wanted to maximise the quality of your recovery.)

So, if you’re wondering how long it takes to get back to running after childbirth, expect it to be around 3 months. To be back at peak performance will take longer.

But this doesn’t mean that you’re not doing anything during that time. Between birth and the 3-month mark, rehabilitation and getting yourself strong enough to run is your aim. And for rehab to be effective and lasting, you can’t rush it. Remember, slow progress is still progress.

High impact exercise like running can put a lot of stress and load through the pelvic floor. A return to running too soon postnatally – when the pelvic floor is already in a weakened state – can lead to further injury and increase symptoms and risk of some pelvic floor dysfunctions, such as incontinence and prolapse. 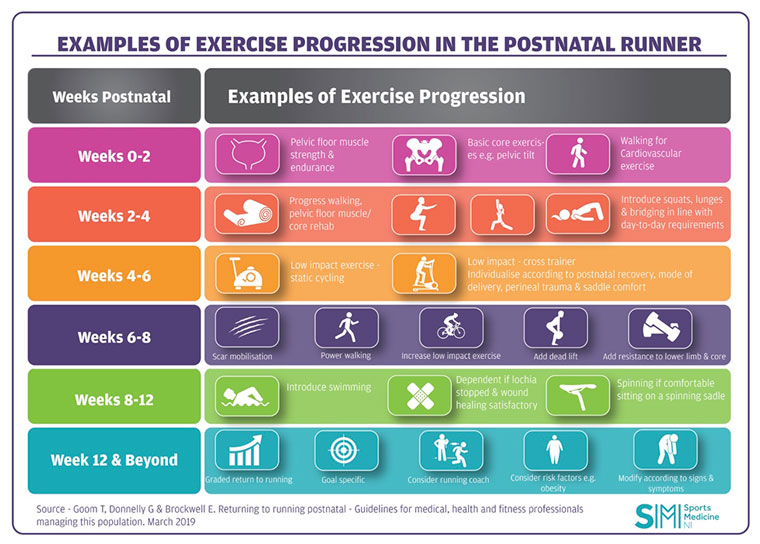 In the first month, the goal is to reintroduce movement. Pelvic floor exercises, along with gentle walking, can begin immediately post birth for the first couple of weeks. Then if you’re feeling ready, you can introduce gentle functional exercises such as squats and bridges, as well as progressing core exercises and continuing the walking. This is also when a postnatal assessment with a Women’s Health Physiotherapist is beneficial. They can assess your pelvic floor muscle strength and endurance, along with your DRAM. They can also offer guidance on your short-term and long-term goals and advise on specific exercises you should be doing to achieve these.

The second and third months

In the second and through to the third month; if you’re feeling good, you can increase your low impact exercise. Think the cross trainer, bike and power walking. And towards the end of the second month start to add and progress some functional strength exercises.

At the end of the third month, a Women’s Health Physio can carry out various health screens to ensure you’re safe to start running. Apps like Couch to 5K are then a great way to gradually build yourself back up to your previous running performance.

If you’ve just had a baby, or it’s been a while since baby and a return to exercise and you have any questions, concerns or need advice, please do get in touch and speak to one of our specialist Women’s Health Physiotherapists.