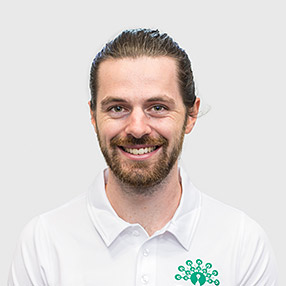 Originally from Australia, Tom graduated with a Bachelor of Physiotherapy from the University of South Australia in 2014. Since then, he has worked in a private practice Physiotherapy clinic in Adelaide treating a wide range of demographics and conditions.

Alongside his private practice role, Tom took on the position of Head Physiotherapist of Newton Jaguars Netball Club in the State Premier league in South Australia for 4 years. He then transitioned into Australian Rules Football, where he worked for Norwood Football Club as the Physiotherapist first for the Women’s team, then for the Men’s.

Always eager to build on his expertise, Tom went back to university in 2018 to complete his post-graduate degree in Sports Physiotherapy, and gain his certification in Strength and Conditioning, which assists him with the exercise management of his patients.

Tom specialises in helping clients return to sport after an injury or surgery, and uses a broad range of manual treatments to reduce pain, along with exercise therapy and liaising with other coaches and trainers to ensure the best outcome possible. He finds that the best way to start treatment is with thorough assessment, in order to address all contributing factors which may have played a part in the development of a condition.